Evolution of the 'childfree' culture 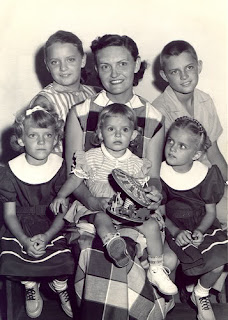 In the middle of the last century, Pulitzer Prize winning American author Phyllis McGinley (1956) wrote:  “Women are the fulfilled sex.  Through our children we are able to produce our own immortality, so we lack that divine restlessness which sends men charging off in pursuit of fortune or fame or an imagined Utopia.”

A similar notion is reflected in Murray’s (2003) commentary on why women comprise such a small percentage of the highly accomplished people in recorded history: “So closely is giving birth linked to the fundamental human goal of giving meaning to one’s life that it has been argued that, ultimately, it is not so much that motherhood keeps women from doing great things outside the home as it is men’s inability to give birth that forces them to look for substitutes.”

As Sir Francis Bacon (1561-1626) put it:  The perpetuity by generation is common to beasts; but memory, merit, and noble works are proper to men.  And surely a man shall see the noblest works and foundations have proceeded from childless men, which have sought to express the images of their minds, where those of their bodies have failed.  So the care of posterity is most in them who have no posterity" (Bacon 1985). 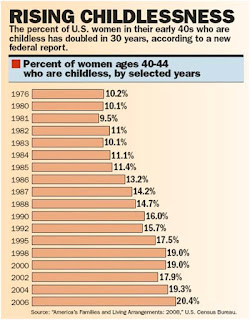 But the long history of patriarchal subju-gation of women (Joshi 2006) has surely been at least equally significant in keeping women "from doing great things outside the home." This is evident from a dramatic cultural shift that began to unfold around the middle of the last century:  women worldwide managed, in greater frequencies, to break free from this oppression, and thus became more empowered to decide for themselves whether they will have children, and how many.

With this freedom, many women elected to have no children at all — choosing to abandon the uniquely female opportunity for symbolic immortality through motherhood. 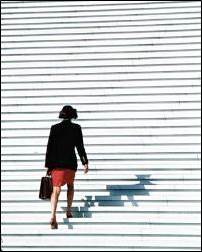 They chose instead to seek 'fulfillment'
from a different domain for legacy —
personal accomplishment — as well as
in domains for leisure.

Both were largely denied to
their oppressed maternal ancestors,
historically controlled mostly by men for men. 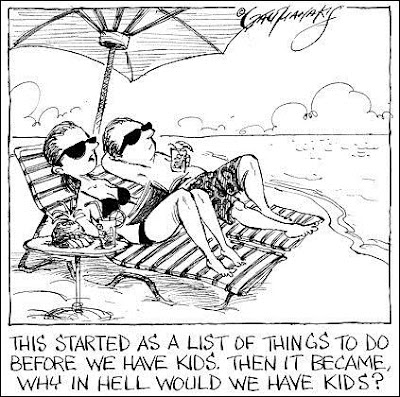 These women are the architects of the modern ‘childfree culture’ (Shorto 2008, Frazer 2011, Sandler 2013, Kingston 2014). Their partners of course also play a role. But because women are now, for probably the first time in history, widely and significantly in control of their own fertility, they are principally in charge of the agenda and momentum of the childfree culture.  On the surface, it has all the symp-toms of a Darwinian paradox. But digging deeper reveals that it may actually have evolutionary roots.  In terms of ‘fulfillment’, it may be understood more directly from a historically male perspective.  In other words, it is men who have been the ‘unfulfilled sex’ — possibly in part because of their inability to give birth, but perhaps more because of paternal uncertainty (thus accounting for their "charging off" in pursuit of symbolic immor-tality through "fortune or fame"). 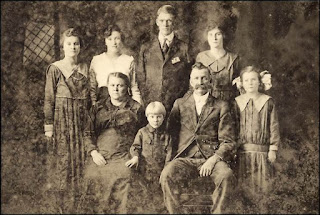 Plus, partly in order to minimize paternal uncertainty, many or most women — throughout most of recorded history — were essentially forced, by patriarchal subjugation and/or religious im-peratives (also controlled by men), to bear offspring (often many) regardless of whether they had any intrinsic desire to be hard-working mothers, or mo-thers at all.  Presumably, many didn’t.

Our 'unfulfilled' male ancestors thus coerced female ancestors — many of whom happened not to have a particularly strong, so called, 'maternal instinct' (or any at all) — to (nevertheless) bear offspring, including daughters who inherited their mothers’ weak maternal instincts.  This presents an intriguing evolutionary hypothesis:  women of the ‘childfree’ culture today, or significant numbers of them at least, may be descendants of these daughters (Aarssen and Altman 2012).

The childfree culture, therefore, may be a product of what we might call a ‘failed disfavouring selection’ hypothesis — i.e., unlike many traits that can be interpreted as a consequence of being favoured by natural selection in the ancestral past, attraction to a childfree lifestyle may instead be a consequence of not having been disfavoured.

Importantly, however, things may be about to change dramatically: Choosing to be childfree — as women are increasingly free to do (as they should be) — means zero gene transmis-sion through direct lineage.  Accordingly, selection against weak maternal instinct (or weak 'parenting drive' — see below) may soon be ramping up (Aarssen 2007). If so, then might this selection, within say a generation or two, spell an abrupt end to the childfree culture? 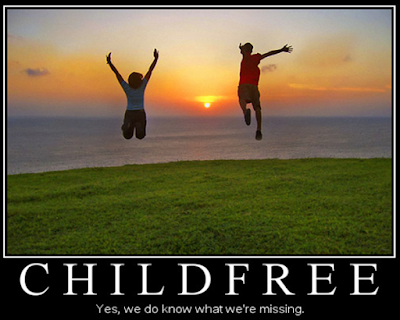 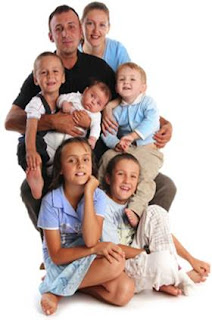 The childfree culture is one of the reasons that world population growth rate started to decline near the end of the last century — a welcoming trend for a crowded planet with “too many people and too much stuff” (Ehrlich and Ehrlich 2008). An important question is whether human birth rate might continue to drop voluntarily and substantially in the coming decades — both in developed countries, where more and more women are embracing small families and the childfree culture, and in less developed countries, where empow-erment for women is gaining more and more momentum (Engelman 2010). But this may be unlikely to unfold so neatly, and maybe not at all — for one fairly obvious reason:  The parents of the future will not be products of the childfree culture. Instead, many of them will be the descendants of women today who are choosing freely and anxiously to raise children, and perhaps especially those who are anxious to raise a lot of them.

Natural selection never limits the reproductive success of resident individuals of any species in order to minimize the collective misery of over-population.  Echoing Charles Galton Darwin (1953), Theodosius Dobzhansky (1962) warned, over half a century ago:

“Reduction of the birth rates is necessary if the population growth is to be contained.  Family planning and limitation are not, however, likely to be undertaken by everybody simultaneously.  Those who practice such controls will contribute to the following generations fewer genes in proportion to their number than those who do not.  Fewer and fewer people will, therefore, be inclined to limit their families as the generations roll by.  The human flood, rising higher and higher, will overwhelm a multitudinous but degenerate mankind.  The assumption implicit in this argument is, of course, that the craving for perpetuation of one’s seed is uncontrollable by reason and education, and that people will go on spawning progeny, even knowing that it is destined to be increasingly miserable.”

There are already signs that this effect may be unfolding now — in part, I suggest, because of selection that has only recently been allowed to favour a strong 'parenting drive' (by disfavouring weak parenting drive).


‘Parenting drive’ is defined here as an intrinsic attraction (informed in part by genetic inheritance) to memetic legacy through influence on offspring, but one that is also heavily infused with intrinsic attraction to a particular kind of pleasure reward at the same time — triggered specifically (odd as it may seem to some) by the hard work of parenting.  Research has shown that there is often a sense of ‘meaning’ in purposeful toil and mundane routine (Baumeister et al. 2013).  Pre-occupation with hard work (especially when purposeful) leaves little time for worry or depressing thoughts, including those rooted in self-impermanence anxiety.  A distracting pleasure then — like that of leisure — is obtained from just staying busy.  And the ‘busy work’ of parenting is available in greater abundance, of course, with increasing family size (Angeles 2010, Nelson et al. 2013).

A strong ‘parenting drive’ can be seen in recent pro-natalist movements involving attraction to large family size — typically supported by wealth, and combined often with religion (e.g. the ‘Quiverfull’ movement; Joyce 2010), but not in all cases (Brooks 2004, Kaufman 2010, Rowthorn 2011, Caplan 2012).  Importantly, prior to the women's liberation movement of the last century, weak parenting drive (despite it’s obvious disadvantage for evolutionary fitness), probably never had widespread opportunity to be strongly disfavoured by natural selection.  But today this opportunity is growing rapidly and globally, as women everywhere are becoming fully empowered, like never before, to take control of their sexuality and fertility, as well as their livelihood and personal goals.

These freedoms for women are of course cause for great celebration, and are long overdue. Is it possible, however, that without coercive measures to limit the number of births per female, contemporary pro-natalist cultures (e.g. like ‘Quiverfull’) could — because of Darwinian selection — soon displace the childfree culture?  And could this result in rising birth rates in the coming decades?   If so, a collapsing civilization (Ehrlich and Ehrlich 2013, Bradshaw and Brook 2014 ) will undoubtedly look more certain than it already does. 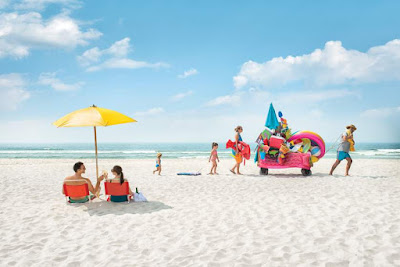 Caplan B (2012) Selfish Reasons to Have More Kids: Why Being a Great Parent is Less Work and More Fun Than You Think. Basic Books, New York.

Ehrlich P, Ehrlich A (2008) The problem is simple: too many people, too much stuff. http://www.alternet.org/story/94268/the_problem_is_simple%3A_too_many_people%2C_too_much_stuff.

Frazer B (2011) The No-Baby Boom: A growing number of couples are choosing to live child-free. And you might be joining their ranks. Details, April 2011. http://www.details.com/culture-trends/critical-eye/201104/no-baby-boom-non-breeders

Kaufmann E (2010) Shall the Religious Inherit the Earth?  Demography and Politics in the Twenty-First Century. ProfileBooks, London.

Kingston A (2014) The no-baby boom: Social infertility, baby regret and what it means that shocking numbers of women aren’t having children.  MacLean’s magazine, March, 2014.
http://www.macleans.ca/society/the-no-baby-boom/

McGinley P (1956) Women are wonderful: They like each other for all the sound, sturdy virtues that men do not have. Life magazine, 24 Dec 1956.

Murray C (2003) Human Accomplishment: The Pursuit of Excellence in the Arts and Sciences, 800 BC to 1950. New York: HarperCollins.

Sandler L (2013) Having It All Without Having Children. Time Magazine, August 2013.
http://time.com/241/having-it-all-without-having-children/