The evolutionary roots of happiness

A wonderful campaign to promote happiness and well-being — Project Happy — was launched recently by students at Queen’s University at Kingston.  I teach a biology course there called ‘Evolution and Human Affairs’, where students explore the evolutionary roots of a wide range of topics concerning the motivations and cultures of humans. Wanting happiness is, of course, characteristic of the human condition. As acclaimed philosopher and psychologist, William James (1902) put it: “How to gain, how to keep, how to recover happiness is in fact for most men at all times the secret motive of all they do, and of all they are willing to endure”.   Efforts to promote happiness then are likely to benefit from a deep understanding of why this emotion matters so much to our species.

We can examine this using what evolutionary biologists call ‘Tinbergen’s four questions’ regarding a particular behaviour: (i) what mechanism triggers it? (Proximate cause); (ii) how does it develop within an individual? (Ontogenetic cause); (iii) what is its function in terms of adaptation? (Ultimate cause); and (iv) how has it evolved within lineages? (Phylogenetic cause). 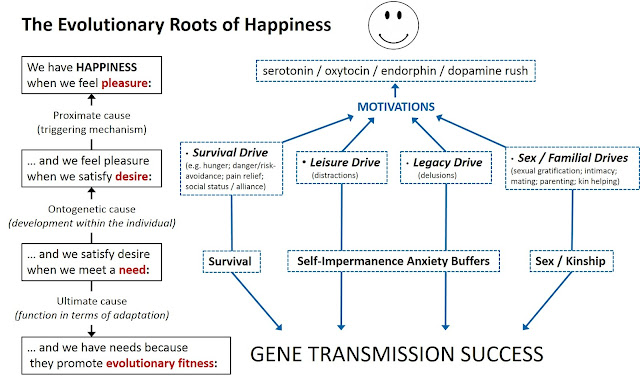 Interesting to note here is that a happy life is not necessarily a ‘meaningful’ life. Life has happiness when desires/drives are sufficiently satisfied. But for many, life has 'meaning' only when a particular desire is satisfied, rooted in a particular need:  esteem for the 'inner self', characterized by a sense that it somehow exists apart from the material body, and so, unlike the latter, is not impermanent.  This need is uniquely human, and so then is the desire that satisfies it — something that I call Legacy Drive: a deeply ingrained susceptibility to delusions of being able to leave something esteemable about one's identity/personhood — an 'extension of self' — that will endure beyond mortal existence, e.g., involving influence through parenthood (mirroring one's selfhood by shaping the selfhood of offspring and grand-offspring), recognition (admiration/status/prestige) through deeds/accomplishments, or transcendence through religion or spirituality (Aarssen 2010, 2015). Thus, when life has 'meaning' in this sense, it normally evokes at least some degree of happiness.  And we strive for it because our predecessors who were so motivated were more likely to become our ancestors.

But life can have happiness without being meaningful in this sense because there are other fundamental needs that, when met, also satisfy desires that trigger doses of pleasure (Fig. 1). Importantly, this includes the need (also uniquely human) to be distracted from 'self-impermanence anxiety' when delusions of legacy don’t seem to be (or aren't) working. These distractions are commonly deployed through something that I call Leisure Drive: a deeply ingrained disposition to be easily drawn to free-time indulgence in opportunities for enjoyment — as an 'escape from self'. Typically, these involve motivations that hack into pleasure modules/triggers (serotonin/endorphin/dopamine rushes) that have deep evolutionary roots associated with meeting core needs (e.g. for survival, social affiliation, sex, endearment, kinship) that rewarded the gene transmission success of ancestors — and manifesting in many modern cultural products for pleasure-inducing distraction / 'escape', like toys, stories, games, aesthetic entertainment, consumerism, humour, recreational sex, meditation, intoxication and psychedelics (Aarssen 2010, 2015).

Note that effective domains of Leisure Drive in this sense need not be particularly exhilarating.  In many cases, they may be pleasant enough (e.g. restfully reclining on the sofa while mindlessly flicking through TV channels) simply because they bring a welcome solace:  digression from the agonies of existence, and of the human condition in particular — the ‘curse of consciousness’ — personal knowledge of eventual mortality, and hence the nagging worry that time will inevitably annihilate all that we do and all that we are. The role of leisure here then is, most essentially, palliative. It delivers respite — a vehicle for periodic escape — from the human obsession of trying/needing to convince ourselves that our existence is not absurd.

Is there 'meaning' to be found in these domains for 'escape from self'?  Perhap not; maybe they are just about being "Distracted from distraction by distraction, filled with fancies and empty of meaning" (Eliot 1943).  But some might describe these distractions as providing a different sense of 'meaning' — one based not in striving for meritable legacy (wherein 'meaning' evokes happiness), but rather, in striving for an untroubled mind.  In other words, a central purpose in life, for some, may lie in maintaining just (and simply) that — an untroubled mind. And if this can be delivered through the intentional deployment of triggers for pleasure, the resulting happiness then indeed evokes a sense of 'meaning'. Of course, this requires a regular and repeated deployment of these triggers; it only works if we keep coming back for more.  Importantly then, the act of 'striving' here is just as true for those whose remedies involve mindfulness and meditation as it is for those who are drawn more to other distractions, like toys, stories, games, and good times with friends at the pub.

As Blaise Pascal (1670, Pensées) put it:  "All of humanity's problems stem from man's inability to sit quietly in a room alone."  The remarkable irony in this is that our predecessors who were most afflicted with this inability were probably those who left the most descendants.  Thankfully, at least, in our efforts to gain, keep, and recover happiness, there is a large 'menu' to choose from (Fig. 1) — although some options may be more edifying than others. One of the most edifying (and with deep evolutionary roots) is represented in the advice of many wise grandmothers: There is always someone worse off than you. Find them, help them, and you’ll feel better.


Aarssen LW (2015) What Are We? Exploring The Evolutionary Roots of Our Future. Queen's University, Kingston.